Among the green of the pines there is the white hamlet of the town, full of picturesque corners through which the famous donkey-taxi walks.

The town of Mijas, declared a Historic-Artistic Site, extends along the mountainside of the same name. The old town retains the trace of Arabic origin and the remains of its ancient walls are today an exceptional viewpoint with beautiful gardens. From this location you get a surprising panoramic view of the Costa del Sol.

The hermitage of the Virgen de la Peña, patron saint of Mijas, was excavated in the rock by Mercedarian friars in 1548. Also from the 16th century is the church of the Immaculate Conception. The temple stands on the esplanade of a hill that hosted a castle and a mosque. It consists of three naves with Mudejar coffering in the central and a bell tower.

The traveler will be able to get closer during his stay in Mijas to the hermitages of San Sebastián and Nuestra Señora de los Remedios, both from the 18th century.

A century later, the hermitage of San Antón was built in fulfillment of the vote made by sailors about to be shipwrecked. This sanctuary is located next to the ruins of Tamisa.

The chapel of Calvario stands out for its location, on the slopes of the Sierra. Until it is reached through a path through which runs a Way of the Cross at Easter. It was erected in the 19th century as a spiritual retreat for the Carmelite monks.

The Plaza de Toros de Mijas breaks with all the architectural canons of this type of buildings. Inaugurated in 1900, it sits on the rock, has an oval ring and its exterior is quadrangular. Several ceramics recall the work of great bullfighters.

Museums in Mijas Max’s Wagon is a curious museum of miniatures. Among his pieces stand a prayer written on the edge of a card and a portrait of Abraham Lincoln on the head of a pin.

The House Museum of the Villa has ethnographic character, while the Bullfighting Museum of Mijas brings the visitor to the history of the national holiday.

To these spaces is added the Interpretation Center of the Torres Vigía, installed in one of the four towers of the beacons that mark the coastline of this municipality on the Costa del Sol.

Donkey taxi Mijas Taxi donkeys are a peculiar means of transport that originated in the sixties of the last century. Many visitors liked to be photographed with the animals of the field workers. Some even asked to go around on their donkeys. The service was professionalized and today is a famous tourist attraction. 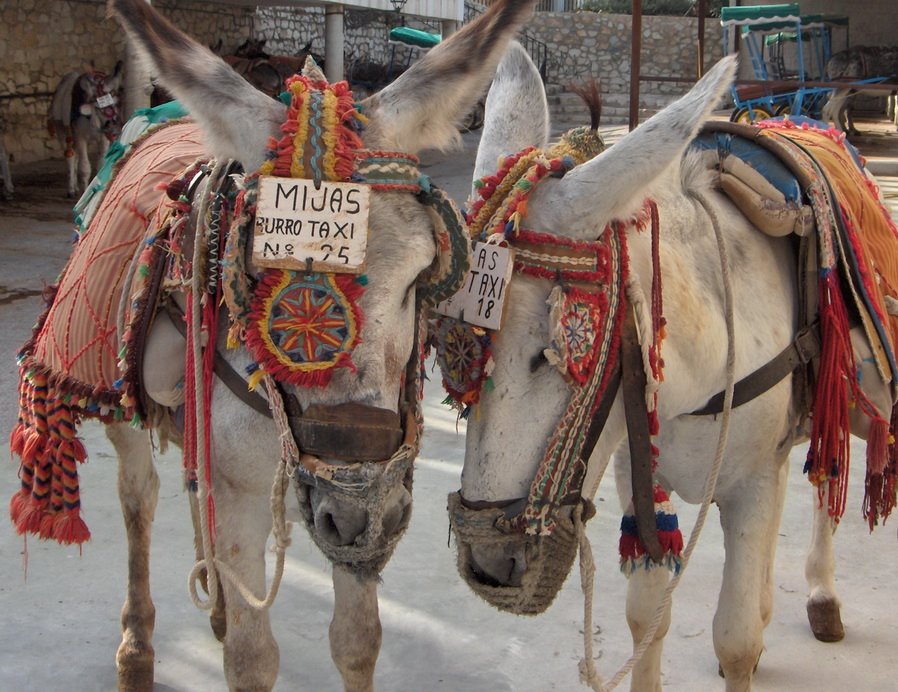